The construction of skyscrapers, roadways developmental projects, malls and high-rises or of apartments in quiet neighbourhoods in the city of Kolkata and the developing suburbia: the image of the city in construction which adorns the landscape of the city is, quite literally, built by migrant labourers, who are mainly masons by profession. The influx of migrant labourers-masons necessary for city-building (for any kind of construction in the city, in fact) comes from, namely, two districts – Murshidabad and the South-24 Parganas, West Bengal.

However, there is an obvious irony in it with respect to their own way of life. Those who come from villages such as Purbadevdaspur, Kakuria, Pratapganj, Jangipur, Housenagar in the Murshidabad district, live on the fringes of the city, crammed together in mere 10x10sq. ft. rooms. Jora Mandir, Ustadipara, near Sarsuna, Chowrasta, located in the suburbs of the city in the South of Kolkata, has a colony of sorts, where they all reside. There are 35 rooms, housing at least six people crammed together in each, if not more and the rent is divided among the residents. In other words, they go about making the city while their predicaments and condition, back in the village or here, remains unnoticed and unchanged. The Invisible City Makers documents these migrant labourers to bring out their ‘reflections’ on the city – the way they perceive the city, what they see it as and how they see it – that they make but are invisible in themselves. 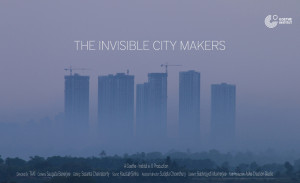